It was gathered that the incident occurred on Friday, November 6, at Graceland Hotel in Irri, Isoko South Local Government Area of the state. 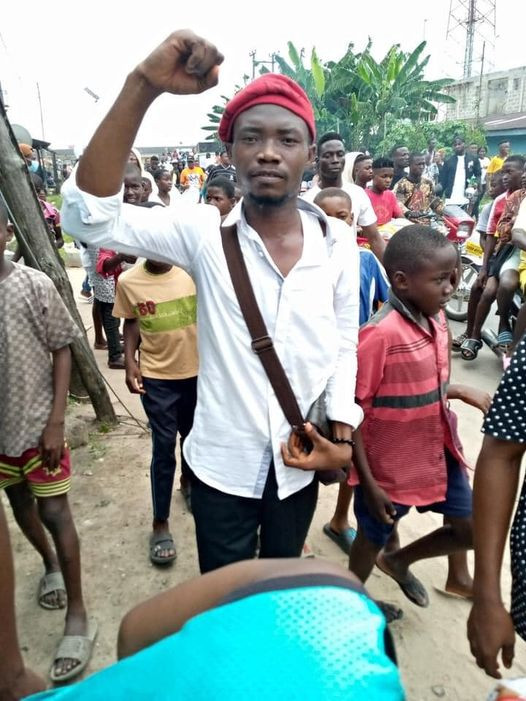 The deceased who hailed from Warri, was set to graduate in two weeks. A photo posted online shows blood stains all over his body.

Confirming the incident, President of Student Union Government of DELSU Oleh campus, Innocent, demanded investigation into the death of their colleague, adding that statements made by the hotel management and the police are conflicting.

"We want to know how our colleague died. Jeffery is to graduate in a few weeks’ time but suddenly lost his life in a hotel swimming pool. All students should stay away from that hotel." he said.

Spokesperson of the State Police Command, DSP Onome Onovwakpoyeya, who confirmed the incident on Monday, November 9, said the student was rushed to the hospital where he was confirmed death by a doctor.

"Yes, a young boy , who they later found out to be a student, died at the swimming pool. They said he came to swim and unfortunately drowned in the pool . By the time he was rushed to a hospital, doctor confirmed him dead." said the PPRO.

Few months ago, the deceased who actively participated in the nationwide #EndSARS protest, had shared a story on a Law Facebook page on how he made a promise to his twin sister to bring home his LL.B certificate.

"I am Tenumah Omatseye Jeffrey, known as Jephizzy on another level. School has never loved me and to be honest, the feeling is mutual. But just like Martin Luther King, I had a dream and that dream was to study Mass Communication after Secondary School. This was driven by the desire to go to Lagos and venture into the Entertainment Industry," he wrote.

"My dream was not mine alone, as my twin Sister also wanted to study Law but for some human unforeseen emergencies, that dream eluded her. I made a promise to her, who shared the same space with me for 9 Months that I shall bring that LL.B certificate she has always desired home. And if it’s possible have her name inscribed as the holder."

Meanwhile, friends, classmates and colleagues have taken to Facebook to mourn his death. In his tribute, one Edafeyivwotu Famous Onoriode, said he had been eagerly looking forward to congratulating on his graduation after 9 years of toiling.

"Jephizzy, Like you always said "DEATH IS A DEBT OWED FOR LIFE IS BORROWED" You left too early. I've been struck in unfathtomable awe as to how and why you left so so soon my brother my friend," he wrote.

"I'm supposed to write a congratulatory post for you next two weeks upon your graduation as a law student after 9 years of toiling and struggling same way I did on your birthday October 26th this year. Tenumah Omatseye Jeffrey you left too early. Jeff your sun rose too early. How do you expect your mum, Jennifer and the host of us you left behind without a notice to cope? Jephizzy if it's possible please come back if not sit majestically at the right hand side of God D Father till the Resurrection morning when we shall meet to part no more.

Another colleague described late Jeffrey as creative and smart. A great writer and poet.

"Jephizzy was a proper friend of the house. He was intelligent, creative, smart, innovative, eloquent, authentic, original, and artistic. This meant that he was capable of blending into almost all spheres of original contents developed by our parent company, ”House Amare”, owners of LSWK World, Wise Yarns, KN-Max Foundation, and K-Circle to mention a few," he wrote.

"As a law student that he was, we discussed the possibility of working on various legal contents in dimensions never imagined. He wasn't just a quick learner, he was capable of improving on your idea on the spot! This he did seamlessly. He was born to be great. He was loved by everyone. He was humble to a fault. He was meek and always willing to help his friends and partners. He was a poet, a writer, an entertainer and a lawyer-in-equity as is said of law students/bar aspirants." 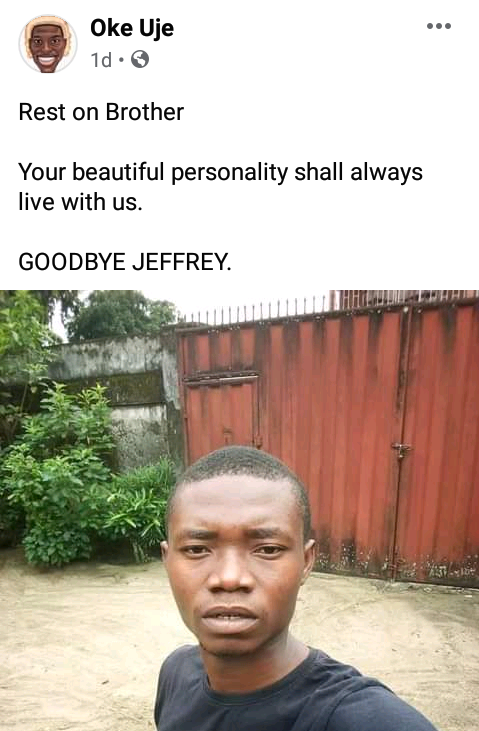 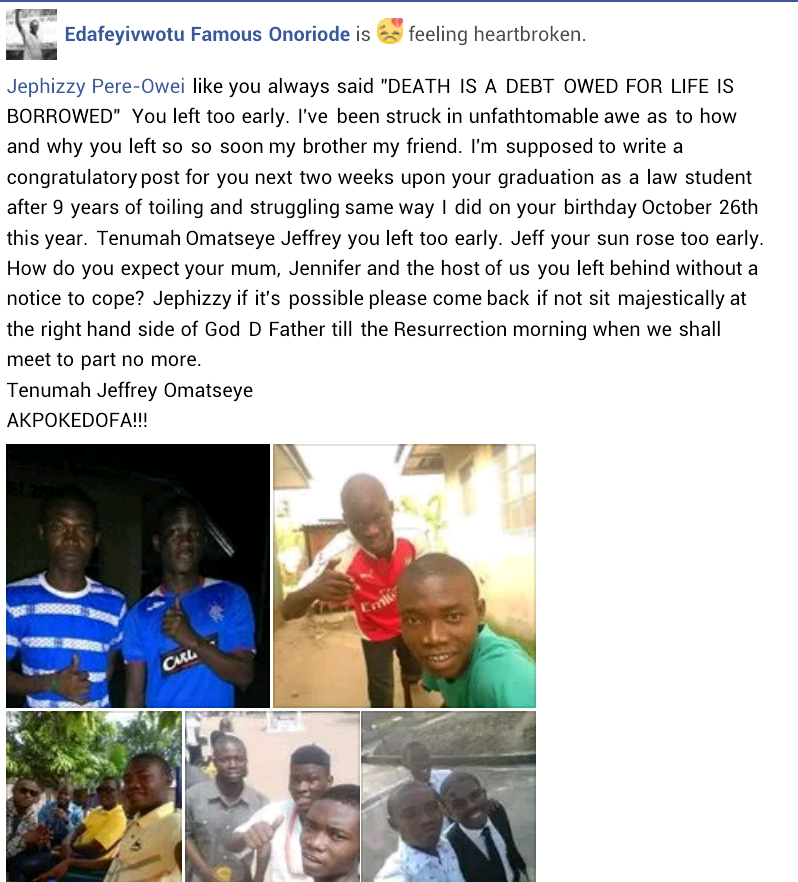 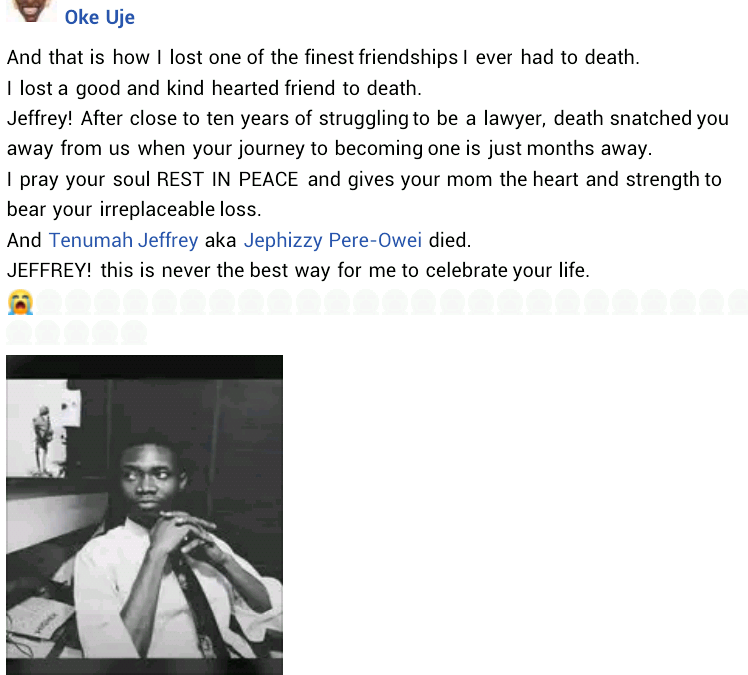 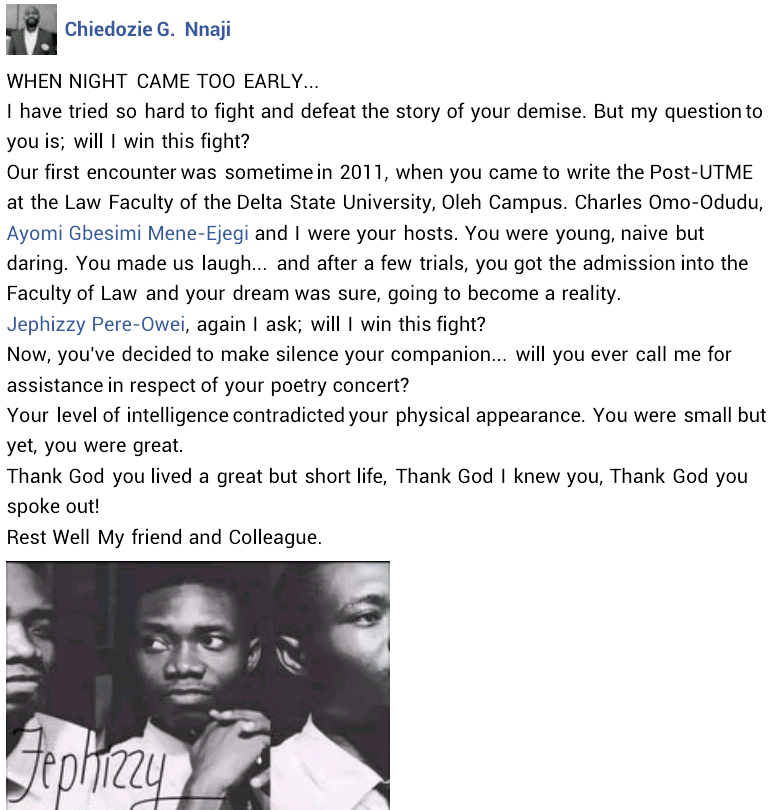 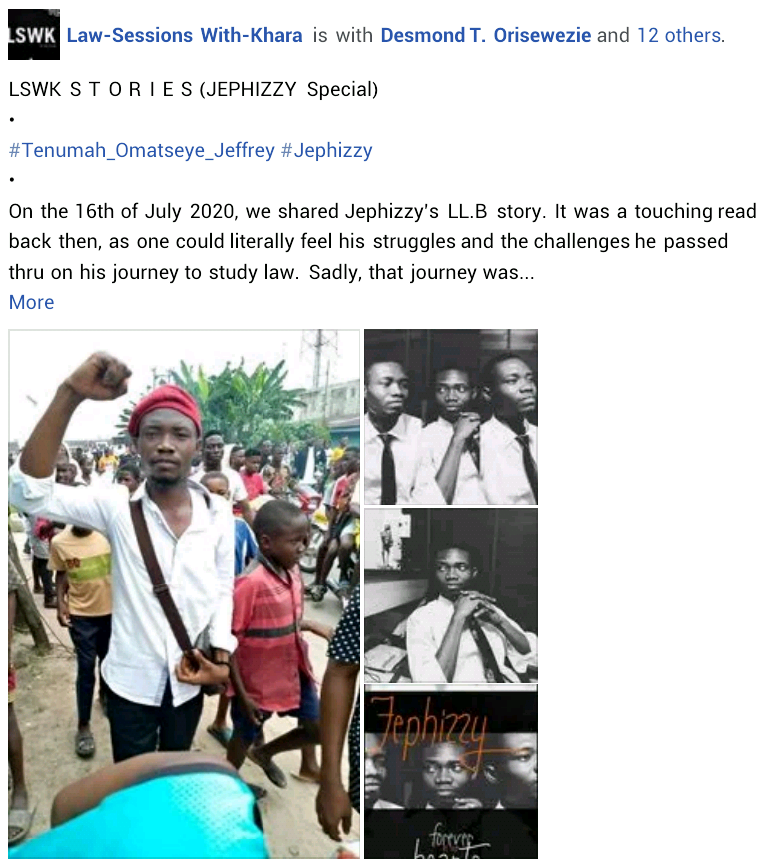 National black out in Nigeria.

A girl allegedly kidnapped by four members of a kidnap syndicate that has been arrested.

NDLEA office burnt down by bandits.